Frida Kahlo’s artworks are iconic. Her depiction of self in her portraits draws from her emotional, and physical pain, she underwent, throughout her life. She redefined beauty with her hard-to-forget looks: strong gaze, fair skin, mustache, and unconventional eyebrows. The majority of her paintings depict these outstanding features.

But who is Frida Kahlo? Magdalena Carmen Frida Kahlo Calderon was a renowned female Mexican artist, who lived from 1907 until 1954. Her life was marked with pain and suffering, which gave birth to her powerful paintings. She overcame her limitations to become the most celebrated Mexican female artist of the 20th century.

Her paintings became increasingly popular after her death in 1954. Some of her renowned portraits are exhibited in world-class museums and the Frida Kahlo museum in Mexico City. Her signature look of adorning her braided hair with colorful flowers has been exhibited in different items such as lip gloss, nail polish, posters, bars of soaps, and street murals, among others. She continues to fetch respect for her artworks across the world.

This portrait depicts the pain Frida went through, after her gruesome accident in 1925. 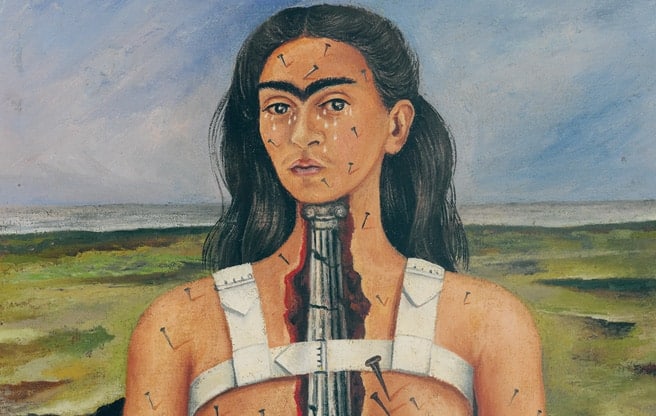 In the portrait, Frida is half-naked from her chest up with nails scattered throughout her body. Her torso is open, revealing her broken spine held together with a steel brace. The background of the portrait is bare and desolate. The artist stares with tears rolling down her eyes; a sure sign of pain and suffering throughout her treatment process.

This masterpiece is one of the most recognized Frida Kahlo artworks. Painted in 1939 after her divorce to Diego Rivera, her husband of 10 years, the self-portrait illustrates the agony she went through because of her divorce.

The portrait has two Fridas with different personalities. Her heart is exposed through her clothing.

On the right, she is wearing traditional Mexican attire and holding a locket with Rivera’s image. 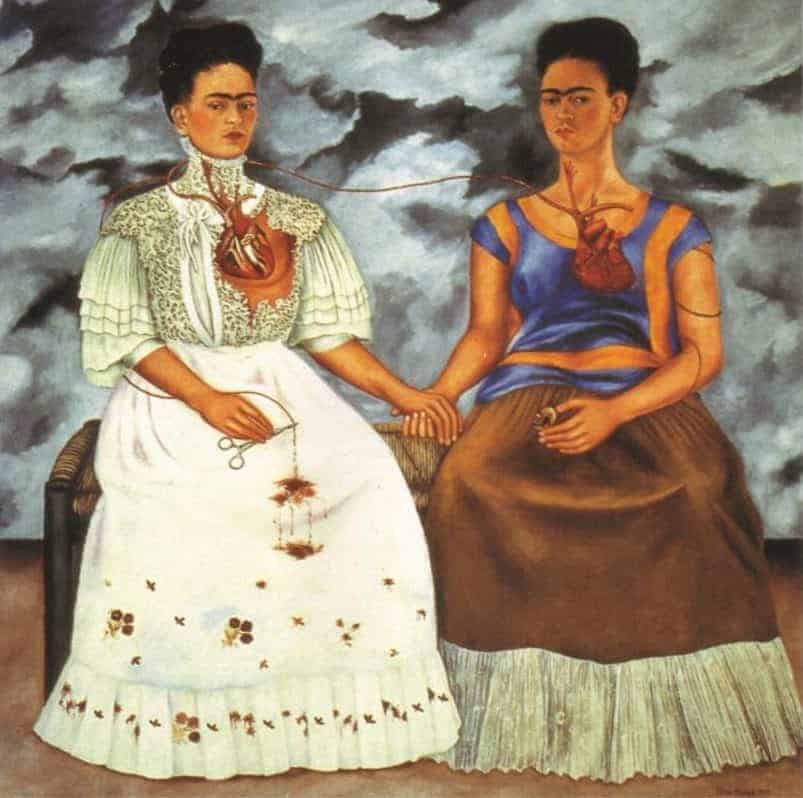 A thin vein is connecting her to the second image on the left; a traditional Frida in European attire, holding a scissor in her hand. The vein from her image on the right is cut, and blood is dripping on her dress.

The two Fridas are holding hands, which probably is a symbol of acceptance. The background of the painting is a stormy sky, showing the turmoil of that stage in her life.

Self Portrait With Thorn and Hummingbird

This interesting portrait has a lot going on. Her stern look with several symbolic animals displayed on a leafy background is so detailed that you might miss a few critical aspects that make it distinctive.

Frida in this portrait is wearing a thorn necklace that digs into her flesh at the neck region, causing her to bleed.

The necklace is held by a black monkey, which was a gift from her ex-husband that seems detached.

The centerpiece of the necklace is a black motionless hummingbird with its wings spread out. On her left shoulder is a black cat. Frida Kahlo portrays her pain through the 35 operations to reconstruct her body after her accident. These surgeries left her fragile with ill health that she couldn’t be a mother. She shows what she felt in her marriage and its subsequent failure.

However, she endures her misfortunes with a calm and composed look as depicted in the painting.

Following her miscarriage in 1932 in Henry Ford Hospital in Detroit, Michigan, Frida was psychologically traumatized. In this piece of art, she paints her feelings in an attempt to heal from her loss.

Lying naked on her blood, this portrait has six red threads from her swollen stomach attached to six elements: a fetus that she lost; a uterus symbolizing her inability to carry the pregnancy to term; and a machine to illustrate the equipment used to perform her abortion. There is a purple flower that she received from her husband, Rivera; probably showing his support. 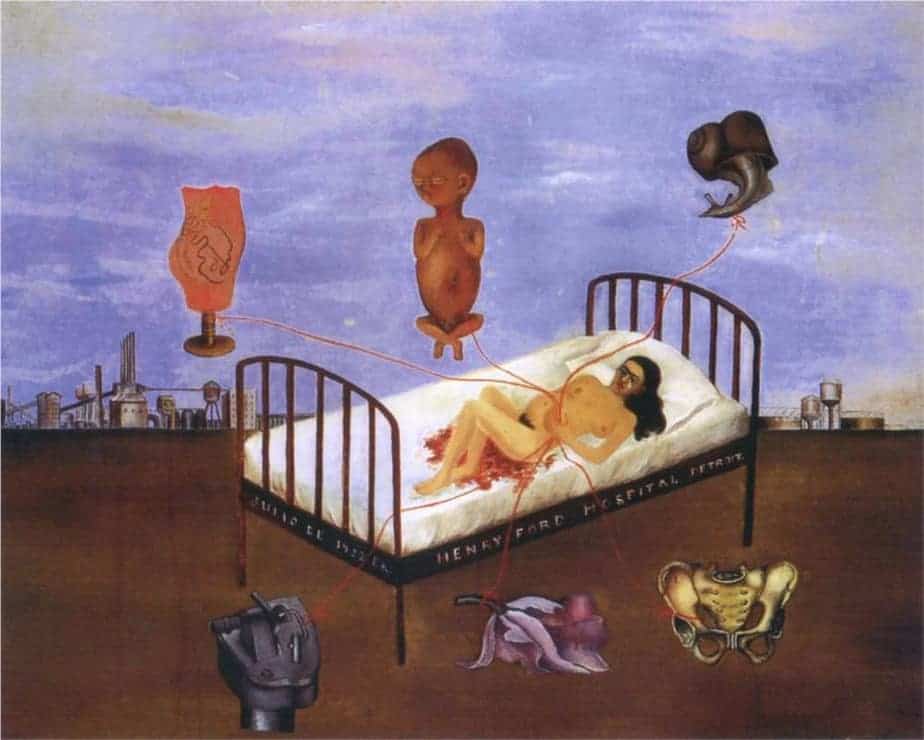 A distorted pelvic and a snail that shows how slow the process of losing her child was.

Just like most of Frida Kahlo artworks, this is another illustration of her inner feelings of suffering, loss, and pain.

After a failed spinal surgery in 1946 that was to relieve her of the severe back pain, Frida was disappointed.

Contrary to her expectation, she endured immense pain after the surgery. 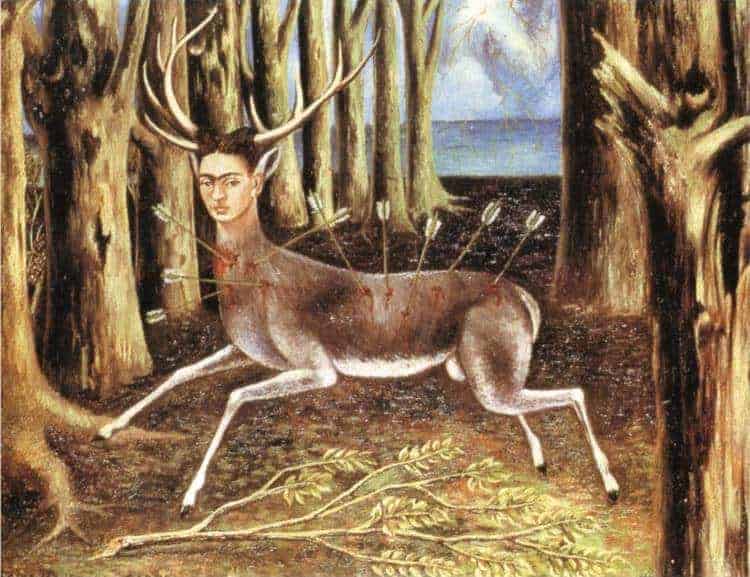 To express what she was going through, she painted a deer with her face. The deer is badly wounded with eleven arrows.

It is seen in a clearing in the forest with dead trees and broken branches. This portrait shows that Frida was in extreme pain, that she couldn’t illustrate it, using her own body. This was a depressing phase in her life.

What the Water Gave Me

This painting integrates bits and pieces of other Frida Kahlo artworks.

Through these pieces, she shares her life experiences from childhood, giving us a glimpse of her happiness and pain, sadness and comfort, death and life, and past and present. Here, she takes a different angle and views her life as a bystander.

The prominent feature of this painting is Frida’s toes, which reflect into the water. Her thigh can be seen vividly under the water.

Floating on the bathtub, water is a volcano with a protruding skyscraper, two female lovers, her parent’s portrait, a lifeless woodpecker on a tree, a Tehuana dress, a drowning woman, perforated shell, and a skeleton, among other symbolic objects. This painting reflects her conscious thoughts and fantasies, some of which had passed while others were yet to happen.

In this portrait, Frida is lying on her back crying. She is tucked in bed and covered in sheets with microscopic life form patterns, symbolizing the diseases that drained the life out of her. She was infected with Polio when she was 6 years, and the subsequent accident in her teens had left her bedridden for months.

The portrait shows a wooden easel holding a food funnel stacked with disgusting food: animals, fish, organs, and a skull. 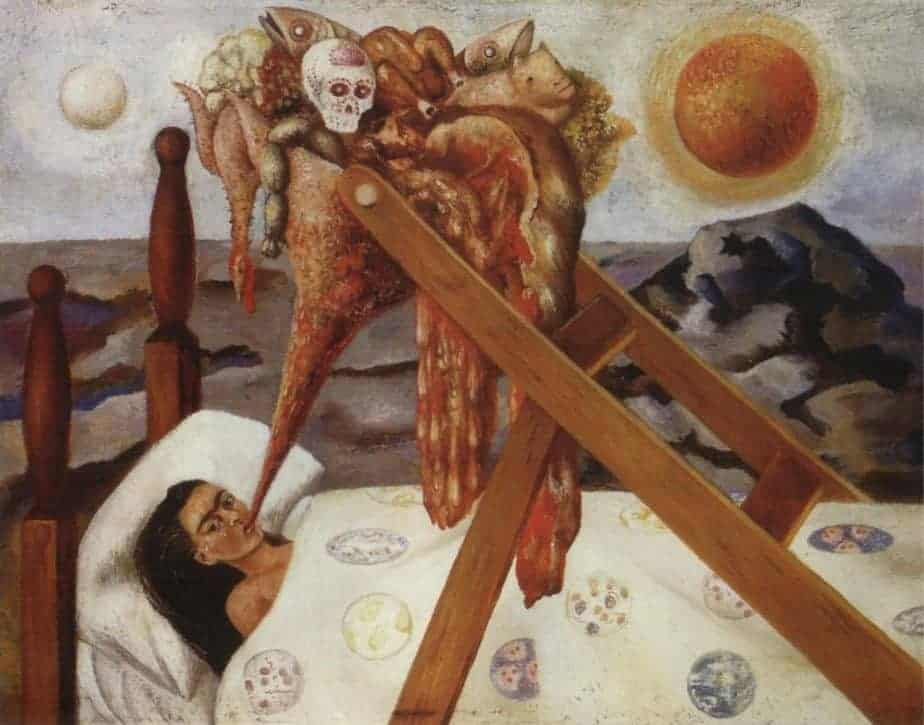 The funnel is piled up such that some of these foods are overflowing. The funnel is directed to her mouth. She creates a contrasting scene with the moon and sun illuminating the deserted background. The moon shows her unfulfilled feminist desires, while the sun symbolizes the doctor’s mandatory meal plan.

This painting shows Frida’s agony when her doctor prescribed fattening pureed food to aid with her lack of appetite. She was devastated, hopeless, and lonely. However, it was the only way to help with her malnourishment.

As part of Frida Kahlo’s artworks, the Girl with Death Mask aligns with the prominent theme of emotional suffering, seen in most of her paintings. Here, she paints a young girl holding a Mexican marigold flower and wearing a skull mask. These are the same ones worn on the annual festival of the Day of the Dead in Mexico. On the ground, there is another mask. The little girl is standing alone on barren land.

Many people have deduced that the young girl is Frida Kahlo. And, the painting is an illustration of how she lived in isolation.

Because of the polio sickness that affected one of her legs at a young age and the subsequent accident as a teenager, Frida withdrew from the crowd and endured her sufferings alone. This was her message.

My Grandparents My Parents and Me

This is a painting of Frida Kahlo’s ancestry depicting her grandparents, parents, and herself. Frida is both the naked young girl standing in Casa Azul, directly in front of her father and the fetus attached to her mother. She is holding a red ribbon that runs along the edges of her parents’ picture and supports her grandparents’ portraits on either side. The ribbon is looped at the point where her parents’ pictures intersect.

Below the ribbon on her mother’s side of the painting, there is a pollinated flower, sperms, and a fertilized egg.

The portrait has been interpreted as an act of deviance as Frida painted it in 1936 after Nuremberg law was enacted in Germany. She was of mixed-race ancestry; German and Mexican.

Me and My Parrots

This is an intimate painting of Frida Kahlo and her four parrots. She did the painting in 1941 after her reunion with her ex-husband, Diego Rivera.

The same year her father passed on. Frida Kahlo loved pets, and she enjoyed their company. In this portrait, she intricately paints the parrots’ feathers to the finest of details, displaying their beauty against her simple and calm appearance. Adorned in Mexican attire, Frida’s gaze outside the portrait and the fine details of her face will glue you to this masterpiece.

On the flip side, she shows courage and resilience with each adversity, transcending societal stereotypes to become a force to reckon with in the art industry.

To date, she inspires artists, feminists, people with disabilities, and the LGBT community. Her legacy lives on decades after her death.

Tags:
art history, inspiration
Newer 25 Inspiring Quotes About Decor and Interior Design
Back to list
Older What are the Functions of Art?

The living room is that place in the home that usually houses the majority of the decoration in the home. This is true since it serves ...

END_OF_DOCUMENT_TOKEN_TO_BE_REPLACED

7 Tips to Decide Before You Buy Art for Your Walls

Before getting that artwork you can’t get your eyes off, here are seven tips before you buy art you should consider. It won’t be ideall...